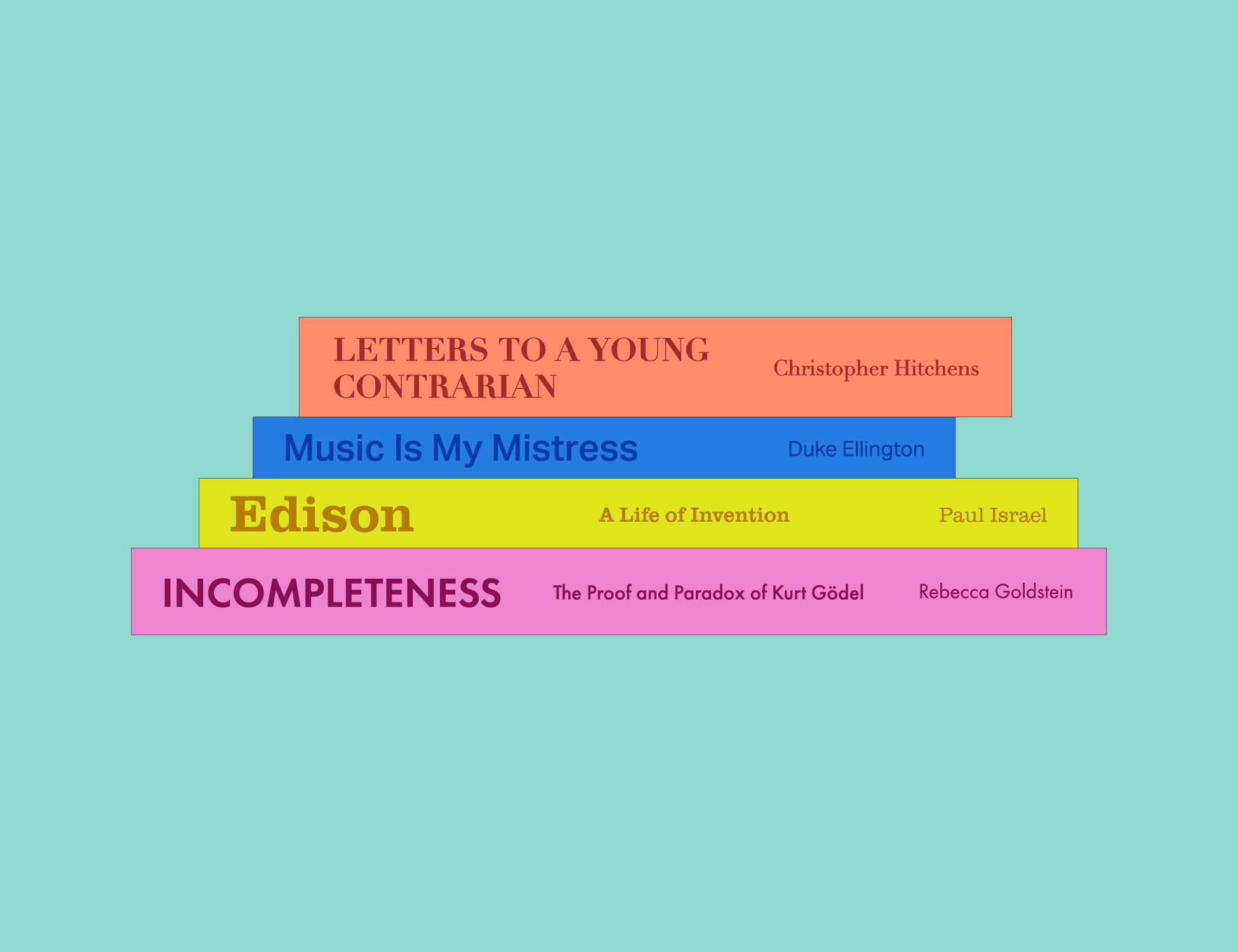 We’re all avid readers at Nanotronics. So we interviewed our CEO Matthew Putman about a few of his favorite books. Here’s his eclectic, inspirational Summer Reading List. Dive in!

Nanotronics: This book is only as good as its subject, but that makes it very good.

Matthew Putman: I’m interested in Edison’s creative process. Can you give yourself strict deadlines to create something? If I were to say I’m going to get up and invent something every day, would that even be humanly possible? Yet Edison held all of his team accountable to that goal.

The incandescent bulb wasn’t considered easy. Every major physicist said it was impossible. It would never stay lit for longer than a few minutes. Edison didn’t listen, literally and metaphorically.

He was fairly deaf physically, but he also didn’t believe more prominent scientists when they said things couldn’t be done.

Edison ignored common wisdom. He knew his team could achieve this engineering feat (and others). But it happened in a specific environment.

The general feeling about Edison is that he was thickheaded — he was wrong about AC power and about motion pictures. But if you skip ahead 150 years, I’d say Edison was right.

It would be great if there was no grid at all; if everything were DC. A huge station every half mile isn’t nearly as elegant as AC, but perhaps it would have set us on a path to have fully distributed power 75 years ago…. It would have been tedious and incrementally complicated, of course, but would it have led to a better world today?

With motion pictures, Edison refused to release the technology to Hollywood, setting cinema in the US back by perhaps 20 years. He thought the cinema should be like a kinetoscope — a personal, solitary experience. It was a philosophical difference. Again, skipping ahead to today, we watch movies in our hands with headphones on. I love the experience of the cinema, so there’s no value judgment here.

Looking at Edison as a futurist, he sometimes invented things the world wasn’t ready for. He is an inspirational character, despite the fact that he was such a (laughing) deeply maniacal jerk.

INCOMPLETENESS: The Proof and Paradox of Kurt Gödel, Rebecca Goldstein

Nanotronics: Incompleteness is a myopic, mysterious window into reality.

Matthew Putman: Rebecca Goldstein’s book isn’t just about Gödel…it’s about Plato, the Vienna Circle, and how mathematical obsession can lead to insanity, paralysis, and death. Gödel also bucked the system in a way. He was in the Vienna Circle, where Wittgenstein and objectivist-style thinking ruled. But he thought in the opposite way — in the Platonic way. For Gödel math, rather than being a tool to understand the universe, was the universe itself.

Following Gödel into incompleteness theory is an incredible philosophical journey.

Gödel believed in a formal truth. He found the math-idea for paradox. Paradox is perhaps where we all are. It’s a myopic, mysterious window into reality.

Paradox is where philosophy and mathematics meet, it’s something to dive into and get stuck in. If math is the universe (and there’s a very good chance that it is) one enters a true rabbit hole. (Laughing,)It also leads to paralysis and death…. Janna Levin opened her first book (How the Universe Got Its Spots) by listing all the mathematicians who committed suicide. Of course, math is one of the most worthwhile pursuits humans are capable of.

I think I’ve heard someone make this analogy: super intelligence from another planet might say, “Oh, I see where they’ve gotten, they’ve gotten as far as math.” That isn’t bad. We hadn’t gotten that far ten thousand years ago.

Nanotronics: Christopher Hitchens is one of your favorite writers, right?

Matthew Putman:  I always say that this is his best book, but I don’t even know if it’s my favorite.

Letters to a Young Contrarian is a call to strength in the way that I saw Hitchens as strong.

His strength was knowing that humans — himself included — were flawed and would never overcome those flaws without conviction. You must be willing to follow an idea all the way to its bitter end — until you realize, inevitably, that the idea is flawed.

Perhaps to my detriment, I’ll start talking to anybody, even when they’re much smarter than me. I met Hitchens at a book party in 2003 or 2004. We talked so much that a journalist he was having lunch with the next day invited me to join them.

Hitchens was not only a great writer but also a wonderful thinker. I’m very lucky to have met a few people in my life that I just want to listen to. Christopher Hitchens was one of them. I didn’t want to get a word in for fear that I’d miss something.

Hitchens wrote 2000 beautiful, printable words a day, even in the hospital.

Our first talk mostly involved him yelling at me for telling him there was a chance he wasn’t going to die. He finally said, “I can see your point about why it might be useful to tell myself there’s a chance I’m not going to die.” His whole philosophy was about not allowing oneself to fall into self-deception.

MUSIC IS MY MISTRESS, Duke Ellington

Nanotronics: Music is My Mistress is a story about collaboration.

Matthew Putman: As a jazz piano player, I’m a huge fan of Duke Ellington. I was interested in reading about his creative life and struggles as an African American musician working at that time, not being able to get into the very clubs he played in. But the book became something else for me. It wasn’t a book about a lone genius, it became a story about how one can collaborate to create something better.

Duke wrote about working in a different location than his songwriters — or playing the piano in a different way to get Billy Strayhorn to compose a completely different song. His way of leading became the gold standard for me. The gold standard wasn’t a great business leader, it was a great bandleader. It’s not only because Duke’s band was well-organized and became famous, but it’s also because the music they created was so good. The music became that good because of his leadership.

Nanotronics: Is there something inherently different about creating alone and in a group?

In music, when we talk about ideas, we’re talking about phrasing, a line, something played in a certain way. Ideas coming out of a big band’s interaction with each other are so interesting to me. It’s one of the greatest challenges I can imagine. This form of collaboration serves as a great inspiration.

How can writing a composition inform the way we brainstorm ideas with engineers, writing equations on a whiteboard in the lab?

You can give me an infinite number of keys, and I’m likely to be less creative than on 88 keys, and the same is true for painting. How do limitations create a framework that allows people to have an infinite amount of creativity? How much of that is organic and how much can be planned? Creating a lab, a company, an invention — all these things are different forms of creativity.

This relates to how I think about factories. I don’t want an assembly line. I want a spoke with everything looping to the machines and back. An assembly line is linear and doesn’t allow for collisions, changing variables, and spontaneous decisions. I’m interested in the final output, not having control over every node.

To control the output, to generatively create something better, that’s an enormous goal. I believe in intelligent, creative people building artificial intelligence. I hope one can apply the lessons of Ellington or Edison, Ornette or Lumet to achieve this ambition.

The Invention of Air, Steven Johnson

The Conversations: Walter Murch and the Art of Editing Film, Michael Ondaatje