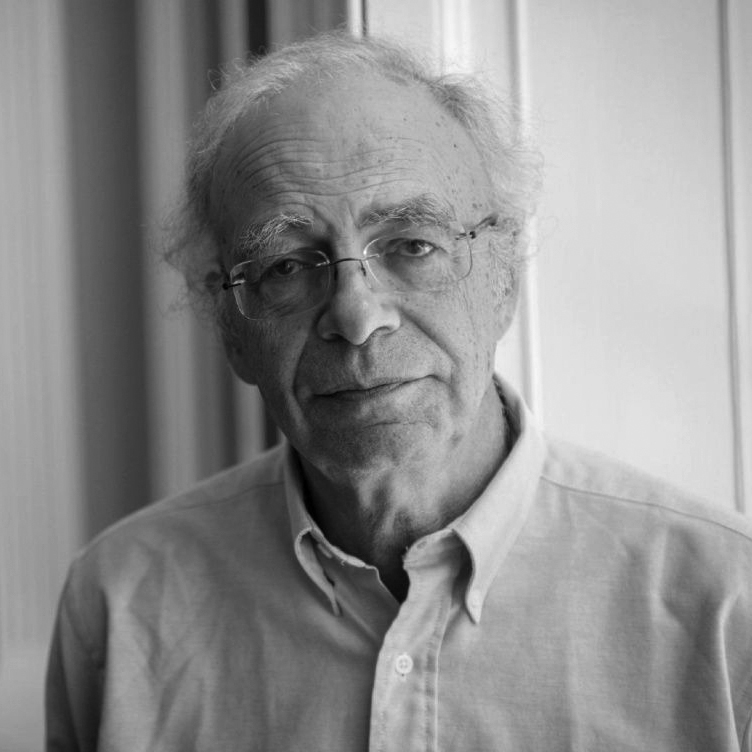 Peter Albert David Singer is an Australian moral philosopher. He is the Ira W. DeCamp Professor of Bioethics at Princeton University, and a Laureate Professor at the Centre for Applied Philosophy and Public Ethics at the University of Melbourne. He specializes in applied ethics and approaches ethical issues from a secular, utilitarian perspective. He is known in particular for his book Animal Liberation (1975), in which he argues in favor of veganism and his essay “Famine, Affluence and Morality”, in which he argues in favor of donating to help the global poor. For most of his career, he was a preference utilitarian, but he stated in The Point of View of the Universe (2014), coauthored with Katarzyna de Lazari-Radek, that he had become a hedonistic utilitarian.
On two occasions, Singer served as chair of the philosophy department at Monash University, where he founded its Centre for Human Bioethics. In 1996 he stood unsuccessfully as a Greens candidate for the Australian Senate. In 2004 Singer was recognized as the Australian Humanist of the Year by the Council of Australian Humanist Societies. In 2005. The Sydney Morning Herald placed him among Australia’s ten most influential public intellectuals. Singer is a cofounder of Animals Australia and the founder of The Life You Can Save.
Journalists have tagged him as the ‘world’s most influential living philosopher’ as Singer’s work on ethics behind the treatment of animals have been credited to starting the modern animal rights movements. He is a known critic of the sanctity of life ethics in bioethics.
Several key figures in the animal movement have said that his book Animal Liberation, led them to get involved in the struggle to reduce the vast amount of suffering we inflict on animals. To that end, he co-founded the Australian Federation of Animal Societies, now Animals Australia, the country’s largest and most effective animal organization. He and his wife, Renata, stopped eating meat in 1971.
He is the founder of The Life You Can Save, an organization based on his book. It aims to spread Peter’s ideas about why we should be doing much more to improve the lives of people living in extreme poverty, and how we can best do this. You can view his TED talk on this topic here.
He has written, co-authored, edited or co-edited more than 50 books, including Practical Ethics, The Expanding Circle, Rethinking Life and Death, One World, The Ethics of What We Eat (with Jim Mason).
Listen on Spotify
Share to Facebook Share to Twitter
Back to posts