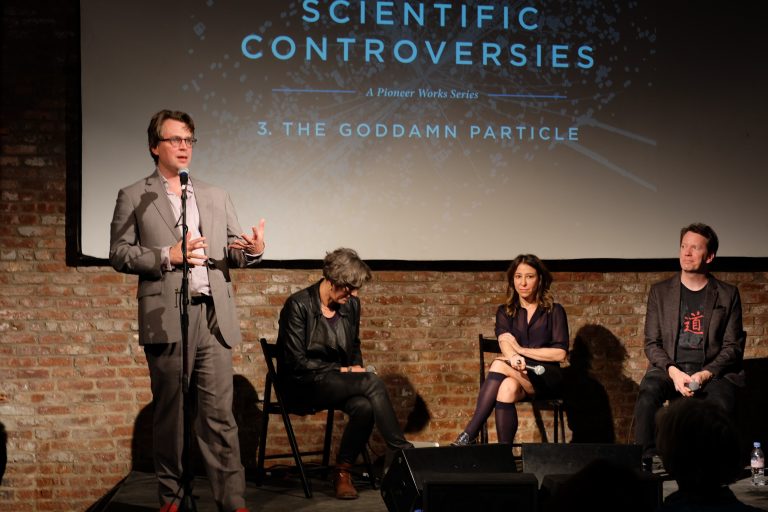 Last week, we had a groundbreaking ceremony in the Brooklyn Navy Yard at the building that will house Nanotronics’ new manufacturing flagship. The foundation for this building was laid over 150 years ago, to build armored ships before the creation of the US Navy.

It was thrilling to make this move official. As I stood on stage with the Lt Governor, our partners, and my father, I looked out at the crowd, which included artists, scientists, philanthropists, customers, employees, investors, and friends, and felt my passions and career truly melding in a meaningful and substantive way.

So, I changed my speech at the last minute. Rather than talking about what it means to bring manufacturing and research together in one building, I instead spoke about creating a project like this in a major metropolitan area. Not just any metropolitan area—but here in New York, which through the years has served as a testbed for creative ideas and movements.

My week could not have been more indicative of this sentiment. Like any New Yorker or someone leading a business, it’s not uncharacteristic for me, or anyone working at the company, to have busy weeks. But last week was one of building inspirational bridges and also appreciating the spaces in which those bridges are formed and make this city flourish.

As I wrote about last week, I attended Gary’s book launch party, had two board meetings, played two jazz gigs, attended a film screening for which I am Executive Producer, and went to SciCon at Pioneer Works, of which I am on the board. SciCon, or Scientific Controversies, is a science program that I started with my friend and respected astrophysicist, Janna Levin in 2014. After touring the space a year prior with co-founder, Dustin Yellin, we decided that in addition to the art that was already emerging from the space, we would also have a science program. We started, with just four of us in the New York office at that time, by building a microscope in a research lab, where resident artists could work with scientists. We did not only create images together, we explored concepts.

It was not long before we decided that these science talks needed be open to a larger group of people and I called one of my favorite physicists and favorite people, Janna Levin. Levin speaks and writes about physics with intellectual conviction, integrity, and an artistry that spoke to the evolving mission. Since we began, Levin has grown this project at Pioneer Works into something far bigger than I could dream of myself (I recently found this radio interview we did together, where we introduce a new program called Scientific Controversies, now recognized more places than I expected, as SciCon). At these talks, we have had visionaries in most major scientific fields, and audiences that approach 1000 people, with waitlists every time. Janna made this into something world class, bringing in Nobel Laureates, and cultural icons such as Siddhartha Murkerjee.

The history of collaboration eventually became a commercial venture for Nanotronics, but never lost the proximity and interplay of ideas inspired by those early Pioneer Works meetings.

This is part of a shared history, but just this past week, the experience came full circle for me, when I attended a SciCon that featured, among others, Gary Marcus, who I wrote about in this blog last week. Gary was in conversation at SciCon about the same limits he discussed at the salon just two days before, but this time, in the same building where Nanotronics research used to happen, a day before the groundbreaking of our new facility, which will house a rapidly expanding team. It hit me how the evaluation of the company and cultural discourse had progressed even within this small circle. In 2014, Gary started a company called Geometric Intelligence, and we were his first customer, and that collaboration was an early iteration of the Artificial Intelligence systems that are now key to Nanotronics technologies.

The interactions that come from working and living in a city are not just enriching, but vital for companies like Nanotronics. I grew up in the rust belt town of Akron Ohio, where art plays a central role. There is a world-class contemporary art museum in Akron—and arguably the best symphony in Cleveland just 30 minutes away. The dots have always connected, but the trajectory is not always moving in a direction that facilitates this. Whether in Akron or in New York, worlds are seen as separate, and not enough people actually have the chance to do what I did last week. There is reason to think that this can change, outside from the popularity of Pioneer Works, or the making of a film by a scientist, or our new Nanotronics headquarters.

My son, who is eight, studies ballet at the New York City Ballet (SAB). He spent time at Nanotronics with me over the weekend, and a few days later, I overheard him explaining to a jazz trumpeter from my basement days a major scientific project for pollution control. It’s not just because he has a crazy Dad who runs around playing jazz and building microscopes. Children don’t separate their love of art from their love of science. They immerse themselves in subjects without predefined barriers. We have a lot to learn from that approach. Science and the arts are the active forces in this city—and their interaction is what makes for breakthroughs, whether through assiduous research or the accidental combustion of chance encounters.