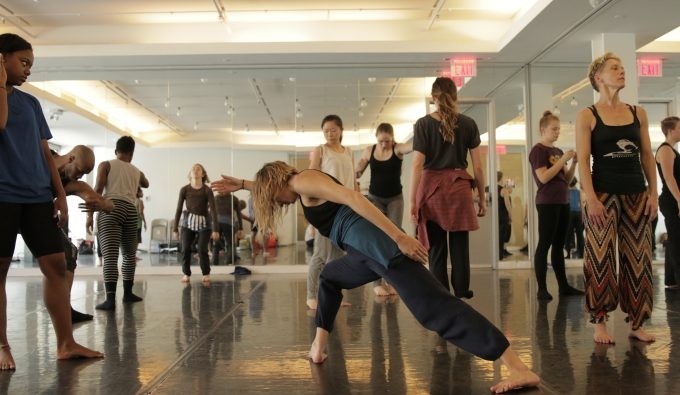 A Bill T. Jones/Arnie Zane Dance Company rehearsal and the construction site for the new Nanotronics HQ. These two works in progress share remarkable similarities, despite the lack of overlap in any particular space. They are both incomplete and at the same time in the process of becoming. They are also endeavors that make life worth exploring. I would much prefer to witness the chaos of creation than observe the finished product. It is only during the creative process that we feel what it is to be truly alive.

The “arrow of time” presents physics with a great unsolved mystery. Time and space are combined to create space-time, which puts us in the center of the moving continuum of the universe. Einstein said, “Time has no independent existence apart from the order of events by which we measure it.” It is a sense of progression toward something we consider our future. The closest and most irrefutable way to think of space and time is through thermodynamics. The second law of thermodynamics says that when energy moves freely, entropy (disorder) increases.

The pleasure of participating in the cosmic blast from order to chaos is the ultimate scavenger hunt in the exploration of the present. Without it, we are starting in the past, even if that past has yet to be created. Great artists allow us to glimpse creation in the midst of becoming. Seeing Leonardo da Vinci’s work today, the most famous creator of western civilization, is like a tour through rehearsals with rooms of entropic experiments (and very few completions) frozen in time. They remain works in progress 500 years later.

Da Vinci said, “Although nature commences with reason and ends in experience, it is necessary for us to do the opposite, that is to commence with experience and proceed to investigate the reason.” It seems that the flow state of discovering should not be stopped. There is nothing to evaluate without it. Being reasonable is being adaptable and experimenting, rather than completing. Scrutinizing a da Vinci sketch book is more enlightening than seeing the Mona Lisa. The mixing of reds and oranges, the precision of anatomical representations, and the choice of line during the painting is more inspirational than viewing the beauty and mystery of the final product. The colors are ordered, the process alive and entropic, and the final product an artifact of genius. We could only imagine how it was created.

I joined the board of Directors of New York Live Arts several years ago, not for access to great seats or recognition as a patron, but because I wanted to see a process in action.

Bill T. Jones is, in my opinion, our most innovative builder of dance and full experience performances. He has inspired me since I first began watching his performances in the early 1990s. I had spent a few days in rehearsals with him many years ago and I remembered that I was lucky to be there. When I joined New York Live Arts I went to an early rehearsal, and then a later one, for a piece he was preparing with his company. My expectations were to take it in, feel what it was like to witness the building of something that I expected to be great, but what came of seeing the process was so much more. To go into detail about how Bill’s rehearsals work would not do justice to the experience. What I took from it was the dynamic nature of detailed hard work planned by a master choreographer, the dancers’ implementation through the leadership of Bill’s collaborator Janet Wang, and a complex adaptation to the moment, the styles, the feelings, and the strengths of each dancer. These elements make live performances so important and live rehearsals indispensable.

I carried my observations and enthusiasm back to my office and worked with it, without knowing exactly how to implement it. I knew that what had happened in the room was related to what we should be doing at Nanotronics. It was clear that Bill and his company were doing qualitatively good things. Whatever we did involved the original elements, starting with a creative vision and incorporating a changing environment in the factories and labs of our customers. I looked at the major projects we were working on and realized that the correlations between a dance rehearsal and a final performance are extremely strong.

The main image that I had been showing our team, and speaking to businesses about, had the word process in it. We were not keeping each part of the manufacturing process the same, we were looking to generate new outcomes throughout the process. We used input from human design and AI partners to make adjustments as conditions changed, in both our factory and eventually in all the factories with whom we worked. I imagined that this was a way to automate for final products, but after that rehearsal I realized that it was something more. It was also a way to encourage a designer and engineer to create concrete and inventive products.

People are the craftsmen who start the process as well as the witnesses of the outcome. A process to create AIs themselves is a search for models that will work in a variety of factory environments. The stages of building foundational products have different actors and the tools we use to adapt to those differences are learning, adaptive systems that correct, collaborate, and adjust.

This may seem like a curious reach, and in many ways it is unfair to make literal comparisons between a great artist, a designer, an engineer, and machines. Yet, it would be difficult to imagine a more inventive, interesting and engaging world as we embrace the process of creation.