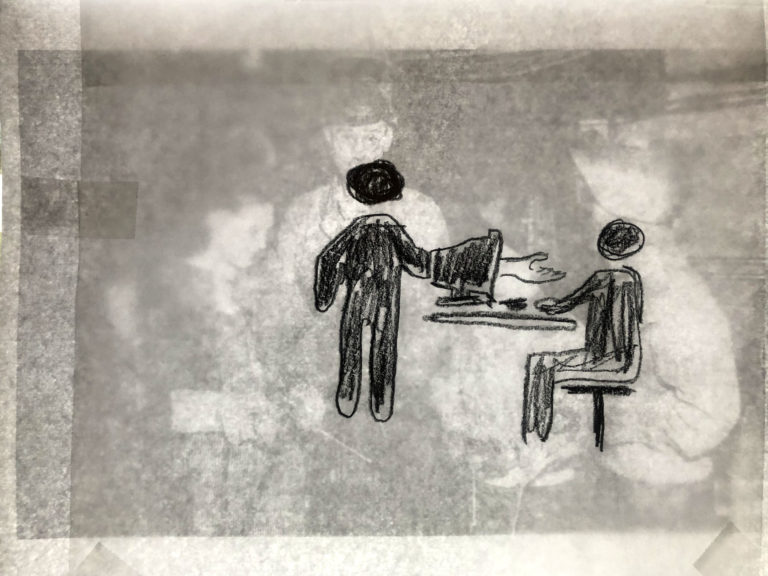 *The full version of this piece can be read here on Medium.

More than speaking about virology, sickness, inconvenience or depression, I have found that the conversations that seem banal can be the most important. If I could sum up the subtext of these conversations, it would be “Do we want a future of work at all?” What brought this to mind was a two-week long case of writer’s block. I am not a writer. This was not too alarming until I started to examine why I could not write about my company’s newly awarded patent. The patent either sat on a desk of the US Patent office or had been passed around for the last five years. My guess is that it is one of those patents where examiners are thinking, “Of course this must not be novel. Someone must have done this,” while at the same time being sufficiently complex that they could not write it off under the clear patent criteria of being obvious.

In a few sentences, (and you are welcome to read a press release on this if you care, or if you really care, the patent itself), the patent is about using gestures to move both physical and virtual objects in concert with other people and machines. Essentially, it is a video game for building collaborations with people and robots. Like humans physically interacting, in this situation, it is not possible to do the same thing at the same time or be in the same place at the same time (a rule of physics).

We delegate tasks, usually unconsciously, through partnerships. We know that if we are driving a car, or being driven by an autonomous vehicle, we or our robots are in constant collaboration with others to not occupy the same place at the same time, avoiding collisions. Our patent is similar. We are required to hand off tasks through movements to each other, no matter where we are. We instinctively collaborate. We wait in line when necessary or choose other paths. These are choices that happen by algorithmic necessity. We have some powers that did not exist before. We have human subtle dexterity, and we have teams working together without danger and from location to build things.

That patent was granted just a month after another patent that we applied for, which involves using artificial intelligence agents to aid humans in correcting for mistakes during the building process. It had not occurred to me until last week that these patents were related at all, but certainly when I even look at these sentences, I see that they are. I think that the real thing that hit me was something that I had not been thinking of with IP protection or while building a business.

I was now thinking about the way we have all been swerving and colliding our way through collaboration without leaving our houses. Every day, the same laptop cameras come on and we join each other for meetings. We make a choice of a fake background, or just showing our headboards or cluttered desks. We ask each other about work. We are almost five months into this routine, and that same question is generally how meetings begin. We are searching for whether we all feel the same without saying it. Do we like not going to the office every day? Why do we feel like we are working harder when we don’t have the burdens associated with commutes? Why are we using Zoom at all, when it might be more comfortable to just speak by phone, which we hardly ever do anymore? I feel like there is something one step deeper that we are searching for an answer to. The question is, are we working at all?

It is an existential question that people face with meditation or psychedelics. We are faced with considering what is real on our screens and outdoors–which we do not experience much anymore. And the more we step out and back into the world, the scarier it becomes as cases of COVID-19 rise and we take shelter again. This is true with the Black Lives Matter protests, the most important social uprising of a generation. Two simultaneous questions: “Are we dealing a powerful blow to racial injustice through passionate action,” and “Are we socially distancing?” In addition, we are also asking the work question, and how our work relates to the nature of reality.

I miss hugging my friends. I miss seeing my family, as I am not with them now. Why not cut to the chase? We need two things still. We need purpose and we need electronics, both of which involve collaboration. We must continue to build microchips, sensors, 4G and 5G networks and cloud servers. We need to build batteries. During a pandemic, without laptops and phones we would be unable to contact our parents, a doctor, let alone access telemedicine. This can become a beautiful closed loop, and these two inventions together are a good example of it. We need our machines, so we need to make them. We need each other so we need to communicate. We need to communicate to collaborate.

This is what we can now do, and we can do it if we are standing next to each other, in different countries, or in the international space station. We are not limited by the strange tech, we are working together, and collaborating in ways that create a kind of tech that would not be possible in any other way.

Recently I interviewed the great mathematician, physicist, writer and inventor, Stephen Wolfram. To my surprise and fear, at the end of our interview, he began asking me questions. I was explaining closed looped AI systems for manufacturing, and was asked something to the effect of, isn’t an iPhone so complicated that it could not possibly be made without a super complicated supply chain, let alone in a factory in the United States, even with the hundreds of billions of dollars that Apple has? I answered that inconceivably complicated products, like an iPhone, are easy to build with human machine interaction. They could be built in a small factory, with people collaborating from anywhere. Is that “work,” or is that building together, as a team, without tedious labor?”

The great Chess master Gary Kasparov, who famously lost a chess match in 1996 to an IBM computer, now says it’s obvious that a machine can beat a human at any game. He also says that when a human player collaborates with a machine, they can beat any computer. This appears to be true.

Alone, these two inventions, the gesture control patent and the AI patent, do not upend institutions or bring about radical abundance. But they do allow us to ask ourselves a question. Is our goal to “work,” or to build a reality that we want to live in?